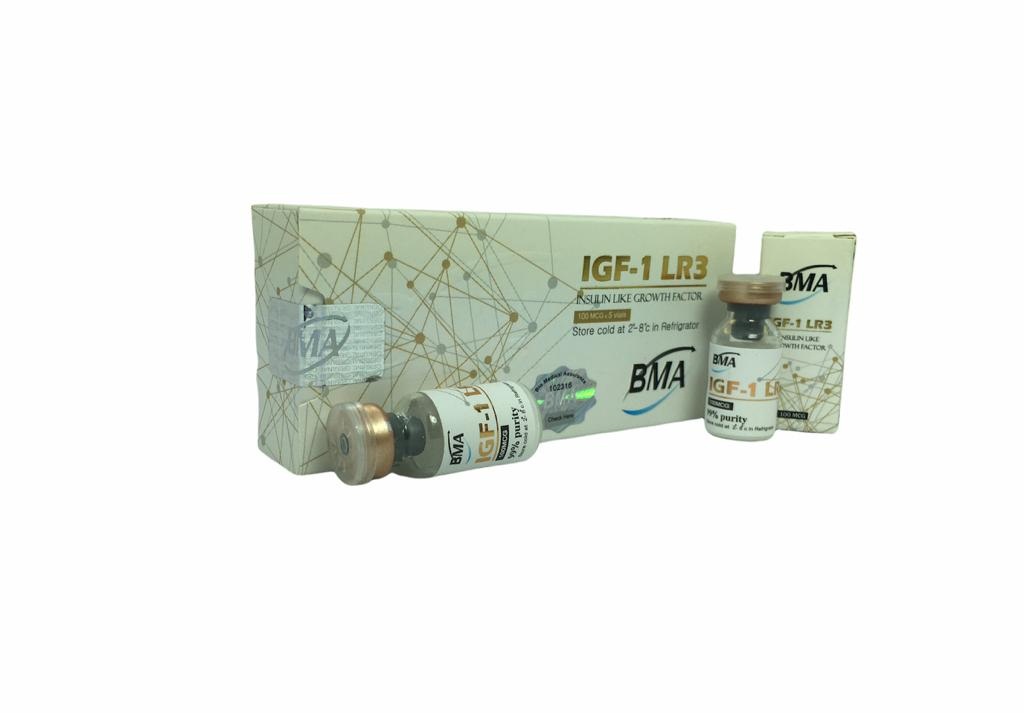 IGF-1 Introduction, History, and Overview
IGF-1, also known as Somatomedin C, has fast become a very popular and widely talked-about compound within the mid-2000s up to the current year of 2017. It has been rumored that the first official use of IGF-1 as a performance enhancing drug was in the early 1990s by then-Mr. Olympia Dorian Yates, which at the time was considered an extremely rare and expensive drug to obtain, after which its use quickly spread among other professional bodybuilders.

IGF-1 is not an anabolic steroid, but is rather a protein hormone (also known as a polypeptide – or simply a peptide – hormone) that is extremely similar in structure to the hormone insulin – another peptide/protein hormone. IGF-1 is endogenously, naturally manufactured and synthesized by the human body primarily in the liver. The production of IGF-1 by the liver is stimulated and triggered by Human Growth Hormone (HGH).
Although IGF-1 is very similar to insulin (hence the nameInsulin-like Growth Factor 1), its role is slightly different. Like insulin, IGF-1 is a nutrient shuttling hormone that facilitates the shuttling of nutrients (such as amino acids as well as glucose) into muscle cells. The cells themselves can then utilize those nutrients in order to synthesize new muscle tissue. IGF-1 is also anabolic in bone, connective, and intestinal tissues. This differs from insulin, which is a nutrient shuttling hormone in a broader sense of the word in that insulin shuttles nutrients not only to muscle tissue, but many other tissues throughout the body. In other words, insulin is not as selective of a shuttling hormone as IGF-1 is.

IGF-1 Chemical Characteristics and Properties
IGF-1 is a polypeptide hormone consisting of a chain of 70 amino acids in length. By comparison, insulin is composed of 51 amino acids in length. As previously mentioned, it is a nutrient shuttling hormone that is quite specific to muscle tissue, and it is an extremely anabolic hormone. It is also anabolic to bone, connective tissue, as well as intestinal tissues. The fact of the matter is that – as mentioned earlier – natural and endogenous IGF-1 manufacture is stimulated by HGH, making HGH essentially a releasing factor for IGF-1, hence why increased HGH dosage effects are limited by how much IGF-1 the liver can produce at any one time. This is where the advantages of exogenous IGF-1 use comes into play. IGF-1, aside from being a nutrient shuttling hormone, also acts to promote muscle cell hyperplasia (the growth and development of new numbers of muscle cells) as opposed to muscle cell hypertrophy (which is the growth of existing muscle cells in size).

Dosing, Administration, and Use of IGF-1
Dosages are as follows for IGF-1 LR3: No more than approximately 40 – 50mcg per day should be used by men, and no more than 20mcg per day for females. Because of its long active half-life in the body, the LR3 variant should only be administered once and no more than twice per day. On training/workout days, the IGF-1 dosage should be administered either just before the workout or just after the workout. It is up to the user’s preference, as either before or after is perfectly fine (as is pre-workout only, or post-workout only). If administered twice per day, the full daily dosage can be split in half between the two (e.g. 20mcg pre-workout, and 20mcg post-workout for a total of 40mcg per day). On non-training days, it can be administered at any time of the day.