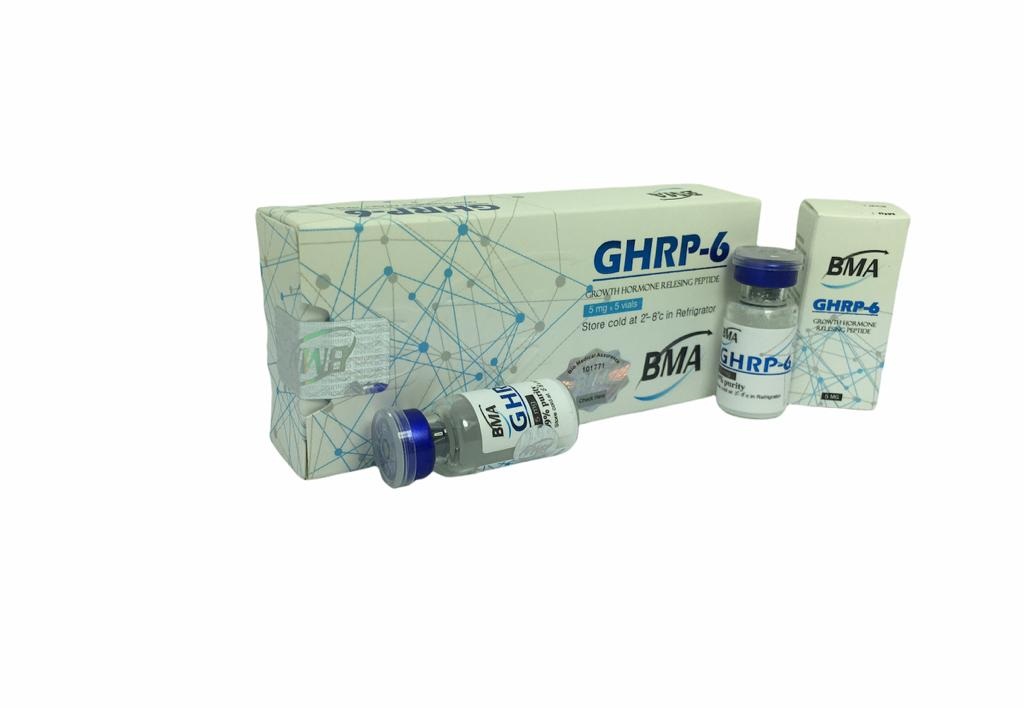 Overview and History of GHRP-6
GHRP-6 (Growth Hormone Releasing Hexapeptide 6) is a peptide hormone (also referred to as a protein hormone) that belongs to a category known as HGH (Human Growth Hormone) secretagogues. That is to say that these peptide hormones will act in such a way in the body so as to stimulate secretion of Human Growth Hormone. Furthermore, GHRP-6 is a member of a category of HGH secretagogues known as Ghrelin mimetics, which are all various Growth Hormone Releasing Hexapeptide analogues. The peptides in this family include: GHRP-6, GHRP-2, Hexarelin, and Ipamorelin. They are referred to as Ghrelin mimetics because they mimic the actions of the endogenous hormone Ghrelin, whereby they will attach to the GH secretagogue receptor at the anterior pituitary gland[1]. Other activities of Ghrelin involve its activity as a hunger-stimulating peptide hormone, which easily explains the ability for many of the GHRPs to stimulate appetite to various degrees. It is very important to note that GHRP-6, as well as the other Ghrelin mimetics previously mentioned are very distinctly different peptide hormones from Growth Hormone Releasing Hormones (GHRH), such as Mod GRF 1-29 (CJC-1295 without DAC). GHRH peptides such as Mod GRF -129, and GHRP peptides such as GHRP-6, are very different classes of GH secretagogues that function through very different receptors and pathways. Therefore, the two should not be confused with one another.
Chemical Characteristics of GHRP-6
GHRP-6 is a protein/peptide hormone consisting of a polypeptide chain of 6 amino acids. This polypeptide chain that makes up GHRP-6 contains unnatural D-amino acids, which were created synthetically specifically for the application of Human Growth Hormone release from the pituitary gland, making GHRP-6 known as a “true” HGH secretagogue. GHRP-6, as well as all other GHRPs, will interact with receptors on the pituitary gland[8] [9] [10] (and in many extents, on the hypothalamus as well[11] [12]) that are distinctly different receptors from the ones that GHRH interacts with. GHRP-6 will stimulate the HGH secretagogue receptor (recently renamed as the Ghrelin receptor), not the GHRH receptor. Through this interaction, GHRP-6 will stimulate a pulsatile release of HGH from the pituitary gland, which is most intense within the first 30 minutes, and lasts several hours (with the actual half-life of GHRP-6 itself being between 15 to 60 minutes)
Properties of GHRP-6
Because GHRP stimulates the secretion and release of HGH from the pituitary gland in a pulsatile manner, the effects resulting from GHRP-6 are very similar from what would be expected from synthetic HGH administration over the long term (see the Human Growth Hormone profile here), although the amount of time that the released human growth hormone will remain in circulation is of a far less amount of time than synthetic Human Growth Hormone does. HGH levels will only remain raised for several hours, with the most significant amounts of HGH release only occurring within the first 30 minutes of administration. It is because of this that multiple administrations of GHRP are recommended throughout the day in order to maintain steady and/or high HGH levels on a consistent and regular basis.

Typical effects of HGH would be experienced throughout use of GHRP-6: body fat reduction, muscle mass increases, strength increases, stamina increases, and increased rate of healing, sleep quality improvement, and general increased well-being and health.
How and when to inject GHRP-6
You will find most GHRP-6 available in 5 mg vials ready to be diluted with sterile water. Once the sterile water is added the vial must be refrigerated and ideally not be kept longer than a month otherwise the potency will begin to reduce.
Some simple maths can ensure you dilute the GHRP-6 in a way which will make dosing the peptide easy. For example, if we add 2.5ml of sterile water to the 5mg vial of GHRP-6 it would result in 2 mg per ml of solution.
GHRP-6 should be taken two to three times per day, at least 30 minutes before a meal for optimal results. Eating around the same time as GHRP-6 can drastically reduce the amount of GH released, so taking the peptide first thing in the morning and spaced in-between meals is a logical protocol.
A dose of 100mcg (0.1mg), three times per day (300mcg per day total) is fairly common and effective. Using our example of a solution made to be 2mg per ml; this would mean each dose would require 0.05ml, which is marked as 5IU on a standard insulin syringe.
GHRP-6 is commonly taken alongside a GHRH (Growth Hormone Releasing Hormone) such as Mod GRF for more profound results. When taken together a much greater pulse of Growth Hormone is released from similar doses as those mentioned above, or a smaller dose can be taken to obtain similar results compared to taking GHRP-6 alone.
If you’re taking GHRP-6 purely to help recovery from injury, a much reduced dose is usually just as effective. A dose of 50mcg could be trialled daily and slowly increase as necessary.
As with Human Growth Hormone use, GHRP-6 is typically taken for an extended period of time, with a cycle lasting months rather than weeks.
Both subcutaneous and intramuscular injections are suitable when administering GHRP-6.